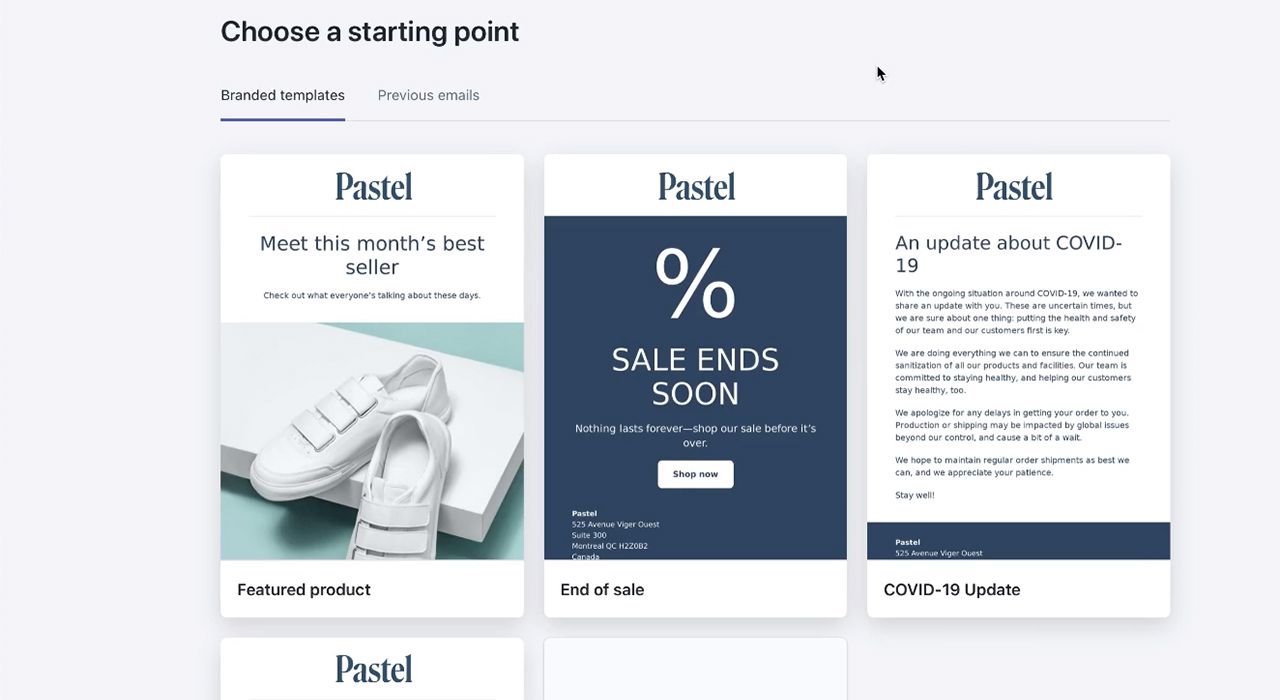 On November 5, 2019, Shopify introduced a new product that works seamlessly with their platform - Shopify email. We’re going to take a look into this email platform and let you decide if it’s the right fit.

Before we begin, let’s take a look at recent history.

What led to the creation of Shopify’s email platform?

Before we start, let’s take a look 8 months prior in March. Shopify and Mailchimp announced they were ending their partnership.

It’s critical for our merchants to have accurate, complete insight into their businesses and customers, and this isn’t possible when Mailchimp locks in their data. Specifically, Mailchimp refuses to synchronize customer information captured on merchants’ online stores and email opt-out preferences. As a result, our merchants, other apps, and partner ecosystem can’t reliably serve their customers or comply with privacy legislation.

We will never put our merchants’ trust on the line like that. The data captured on behalf of our merchants belongs to those merchants, it’s as simple as that. Mailchimp was not willing to agree to these terms. That’s why Mailchimp has been removed from the Shopify App Store.

Our shared users have complete control over their own data. By continuing to connect with Shopify through third-party integrations, we’re providing our shared users with the choice to share that data going forward. What we’re not willing to do is automatically and retroactively share all of this data with Shopify, including data acquired outside of and not connected to the Shopify platform, without the user involved. From our perspective, that data belongs to our users and isn’t ours to share directly with Shopify.

The new terms also make it clear that Shopify wants to control which providers their partners work with and how they conduct their business. We believe small businesses are best served when they can choose which technology they use to run their businesses ... We won't compromise on that just because Shopify sees it as a competitive threat.

What’s important to note is that while part of the reason is due to privacy, what we’re seeing here is moreso the exclusive ownership of customer data. The privacy stance appears to be emphasized in order to appear in positive light to consumers.

Immediate positive side effects for Shopify

A side effect of the partnership breakup can be the positive impact on user experience, and Shopify’s decreasing reliance on 3rd party applications.

Over the years, one of the problems with Shopify is the incohesive experience users have from jumping between apps. From problems in user experience to technical performance hits on sites, we can see that Shopify is slowly rolling out its own features as a step to strengthen their eCommerce offerings without heavily relying on 3rd parties.

A look at Shopify’s email platform

Shopify Email is aimed for new business owners and those unfamiliar to email marketing. They’ve even said it themselves - “Shopify Email is built for merchants who are new to marketing their business.”

And to quote Shopify again, “... no experience needed, you’ll look like an expert right from the start.”

Looking like an expert and actually being an expert are two different things. Here are some actual experts.

It provides a combination of easy-to-use design tools, ability to send emails to list, segment users, and analyze the performance of emails. Within the platform, it’s incredibly simple to use all these features, but unsurprisingly, the functionality and features are extremely limited.

Shopify is slow-rolling out it’s email platform feature. Fear not if you do not have access, within the next several weeks, you should be opened up to the email platform.

Ready out of the box

For small business owners with few capabilities, this can be a blessing - they have the ability to create pretty emails out the box with beautiful templates.

There’s very little setup the user has to do - the design tools are simple, but limited. In many ways, the email experience appears to mimic the store creation using one of Shopify’s default templates - it looks great if you only need to make simple tweaks.

The most powerful feature coming out of all this is the seamless integration with your store and CMS.

Say you’d like to advertise a product from your store. When you pull that product into the email, Shopify will automatically pull the relevant information such as putting the product link into the button to direct users to its product page. This can apply to other fields such as pulling in the price or relevant images.

Although this may appear amazing for personal customization, its capability only goes so far. More advanced wishful features - such as automatically populating a unique product for each of your user segments - Shopify Email does not carry this level of sophistication (at least not yet).

Don’t expect much - Shopify will include all the basic features any email marketing platform should have.

Shopify’s template builder isn’t too different from what email platforms offer - except that it has even more restrictions on what the user can do.

You don’t need to worry about messing up! It’s a simple top-down builder with some basic elements the user can edit in a few clicks.

Shopify allows you to send using your domain name and segment users based on basic criteria.

But … it’s not going to be very fleshed out like Klaviyo’s:

What you need if you’re a small business and you have other priorities. You can always create your own Google Analytic  tags and add them onto buttons … however if you’re already willing to invest into this level of complexity for your email marketing campaigns, you’re likely looking past Shopify Email.

With so many platforms out there to help manage your small business, it can be a pain to switch focus from app to app. Shopify Email is one less tab to go out of when managing your online store.

Shopify’s price-point is a low barrier to entry to those new to email marketing. For those looking to grow their business for the first time, it’s extremely generous.

Until October 1, Shopify Email is completely free for those on any Shopify plan. After October 1, there’s no monthly commitment and pay-per-use instead with all features included. You get the first 2,500 email sends free and afterwards, it’s only $1 per 1,000 additional email sends.

Keep in mind, the pricing is reflective of the number of features Shopify Email currently offers.

If you’d like to learn more, check out how to use  Shopify Email to create email marketing.

Should you use Shopify Email?

If you’re starting out as a small business or dropshipper, Shopify Email can be a fantastic launch point into email marketing before moving onto a platform with greater capabilities.

For those who are more mature to the email marketing space, we’re also excited. We hope Shopify can release a greater set of features in the upcoming future that will enable it to be more competitive vs. other email marketing platforms. The value add of Shopify integration with your store products and a wider set of email marketing features would be too hard to resist.

With all that said, a great email marketing campaign isn’t built from just a drag and drop editor and sending it out to consumers.  Although Shopify Email can simplify things as much as possible for a new user, a great email campaign is made up of things only specialists can offer - an expert conversion copywriter, visual designer, and an architect to craft your overall email strategy to drive growth.

This is what makes email marketing such a great space to work in. If you’d like to talk to email marketing experts - even just for advice, Jasper and I (we are founders at Grab Digital) would be more than happy to help. Check us out at grabdigital.co. We hope we’ve grabbed your attention .... *crickets*

Nelson is co-founder of Grab Digital and enjoys the simple things in life - like plain oatmeal.